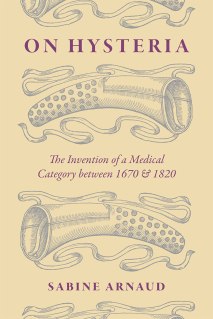 On Hysteria. The Invention of a Medical Category between 1670 & 1820
Sabine Arnaud

$55.00| 376 pages
These days, hysteria is known as a discredited diagnosis that was used to group and pathologize a wide range of conditions and behaviors in women. But for a long time, it was seen as a legitimate category of medical problem— and one that, originally, was applied to men as often as to women.
In On Hysteria, Sabine Arnaud traces the creation and rise of hysteria, from its invention in the
eighteenth century through nineteenth‐century therapeutic practice. Hysteria took shape, she shows, as a predominantly aristocratic malady, only beginning to cross class boundaries (and be limited to women) during the French Revolution. Unlike most studies of the role and status of medicine and its categories in this period, On Hysteria focuses not on institutions but on narrative strategies and writing—the ways that texts in a wide range of genres helped to build knowledge through misinterpretation and recontextualized citation.

“A rich slice of eighteenth‐century cultural history and a bold methodological intervention into the history of science and medicine.” —Jan Goldstein, author of Hysteria Complicated by Ecstasy

One thought on “New Book: On Hysteria. The Invention of a Medical Category between 1670 & 1820 (Sabine Arnaud)”