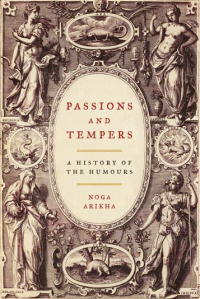 Passions and Tempers is a real treat. Noga Arikha has written a lucid book that provides a concise history of humours and how they evolved from Hippocrates in the 5th century B.C. to the mid 20th century A.D. Arikha sought neither to revise nor to add new evidence on the history of humoural medicine, so her book might be received with a slight sense of disappointment from a specialist, expecting a dry account of a seemingly bygone medical method. However, for the lay reader, and even for an informed reader, the book provides an excellent introduction to humours, and a thesis that jabs right at the heart of the history of medicine, or more specifically, the inability of doctors to part with their theories.

The book is divided into seven chapters; each chapter tells the story of a new era of understanding, or the evolution of humours in medicine: from the earliest beginning in ancient Egypt and Greece, to the transmission of humoural theories in the Muslim world, to physicians in Europe during the Middle Ages and the early modern era. The four humours, or fluids that were hidden in the human body, explained much about health or disease. The human body required a balance of blood, choler (yellow bile), melancholer (black bile), and phlegm to remain healthy. These fluids should not be confused with the visible secretions of the body, such as blood, puss, blood clots or mucous; instead, they were invisible within the bloodstream, thus their influence on body and mind could only be determined by a study of the symptoms. Although no physician had ever seen these humours with his own eyes, the diagnosis of an imbalance in humours sent physicians, throughout the ages, to prescribe medicines and treatments that were to restore some form of balance. These remedies were sometimes bitter, cold, hot, sweet or even involved sending a patient to a different location.

Each humour corresponded to a combination of basic qualities: hot, cold, wet or dry, which in turn were related to the four elements: air, fire, earth and water; and, the seasons of the year: spring, summer, fall and winter. In fact, each humour had a matching color, and even a time of day, when its influence on the body was thought to be stronger. Humours were so ingrained in medical theory that they also had corresponding temperaments: sanguine, choleric, melancholic and the phlegmatic personalities.

As one era gave way to another, new meanings were attached to this basic division of the human body; whereas melancholia might have been related to demonic possession in one period, it turned into a clinical disease in another. Yet another disease of the melancholer was hypochondria, or an excess of black bile in the body. Today, hypochondria is associated with a morbid fear of diseases, a form of melancholy; however, in the 16th century it meant something completely different: Duke Francesco Sforza, whose liver stopped producing yellow bile and produced black bile instead, was diagnosed with dropsy, or swelling of organs due to an excess of liquids, which eventually killed him in 1466. Today, as Arikha pointed out from the known medical data, doctors might have diagnosed the duke with hepatic cirrhosis, which is, as the name suggests, a disease of the liver, but is not a type of hypochondria.

I found the digressions in the book entertaining, but some readers might find that Arikha spent too much effort on explaining historical events that had little or no influence on physicians and their understanding of humours. For example, she devoted a subchapter to Galileo’s cosmology without explaining how it had affected humoural medicine, if at all. This digression, however, should not be discounted as merely a fanciful description of an unrelated theory. Instead, it helps the reader to identify one of the underlying themes of the book, which revolves around the seen and unseen elements of medicine and the struggle between secular and religious methods of healing. In an attempt to describe the human body, secular physicians resorted to humoural medicine as opposed to religious methods of healing in an attempt to trace god’s or the gods’ will. Physicians could rely on humours to diagnose maladies, which led to their prognoses. As a result, physicians had no need to rely on miracles to heal. They also stressed the need to rely on observation, just like Galileo had suggested, but with their reliance on humoural medicine they fell into the same pitfalls as priests because they entered the realm of the unobservable, and delved into theories that they could not test or even see.

The most interesting chapter of the book was reserved for last. In it Arikha examines the influence of humoural medicine on us, our lives, and more importantly, on our doctors. She demonstrates that despite the medical revolutions of the modern era, old ideas died very hard, and sometimes were revived, or kept an existence in the background. Thus, she illustrates how modern day medicine explains addiction in a surprisingly similar tone to how the mechanics of love-melancholy was depicted in the 17th century.  In fact, the old theories of olden days still exist today in common parlance as one can still speak of melancholic or sanguine personalities.

After reading the book, I could not escape from the thought that perhaps doctors are still influenced by the four humours when they impress on the public ideas that I, like the rest of us, should exercise more, eat less red meat and watch my cholesterol. And so, I decided to check my humoural personality on the book’s webpage at www.passionsandtempers.com. Perhaps the reader would discover, as did I, that he has a healthy dose of blood and phlegm, but a lack of black and yellow bile, making me a bit too passive and prone to contemplation and thought rather than action. Now, I can only speculate on the remedies my doctors would have me take to restore the balance to my body. Would they really have me exercise, swallow bitter pills and eat less dairy products?