Skip to content
Posted on April 3, 2017 by Eva Andersen Posted in Uncategorized 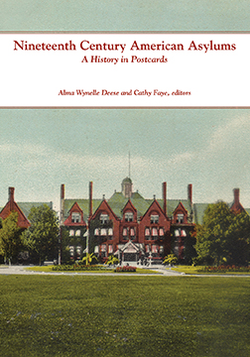 The book Nineteenth Century American Asylums. A History in Postcards could be of interest to h-madness readers. The volume is written by Alma Wynelle Deese & Cathy Faye. The abstract reads:

In the nineteenth century, several institutions were established in the United States to house and care for the mentally ill. By 1880, 139 “asylums” and “mental hospitals” had been created using both private and public funds, and by 1890, every state had built one or more publicly supported mental hospitals. Although early American asylums were often underfunded and crowded, they were often one of the few options for those suffering from mental illness. These large and grandiose facilities could therefore serve as a place of refuge. In addition, these asylums were significant places for research and teaching in early medicine, psychiatry, and psychology.

Postcard production blossomed in the late 1800s and early 1900s, coinciding with the establishment of many “state lunatic hospitals.” Featuring more than 300 images of early public and private asylums as presented in picture postcards, this book offers a fascinating view of these grand structures, the expansive grounds and gardens they occupied, and their unique architectural features. The images are accompanied by brief historical descriptions of each institution, along with information about their current status. Together, the images and text offer the reader an opportunity to explore the space and places of early mental health care of the United States.

This information was retrieved from the Advances in the History of Psychology blog.