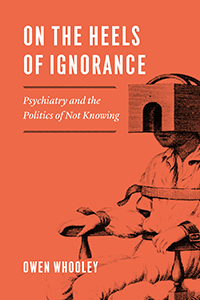 The book On the Heels of Ignorance Psychiatry and the Politics of Not Knowing, by Owen Whooley, published by the University of Chicago Press. The abstract reads as follows:

“Psychiatry has always aimed to peer deep into the human mind, daring to cast light on its darkest corners and untangle its thorniest knots, often invoking the latest medical science in doing so. But, as Owen Whooley’s sweeping new book tells us, the history of American psychiatry is really a record of ignorance. On the Heels of Ignorance begins with psychiatry’s formal inception in the 1840s and moves through two centuries of constant struggle simply to define and redefine mental illness, to say nothing of the best way to treat it. Whooley’s book is no antipsychiatric screed, however; instead, he reveals a field that has muddled through periodic reinventions and conflicting agendas of curiosity, compassion, and professional striving. On the Heels of Ignorance draws from intellectual history and the sociology of professions to portray an ongoing human effort to make sense of complex mental phenomena using an imperfect set of tools, with sometimes tragic results”.

Interview with the author on the New Books Network

You can also find an interview with the author (done by Krystina Millar) wherein he discuses his book, the sociology of knowledge, the changing identity of psychiatry, and the DSM on the New Books Network.