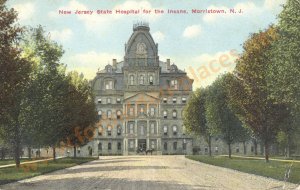 Forbidden Places is an on-line collection of photographs by an artist named Slyv, who describes his passion for urban exploration as developing out of childhood trips to empty factories; he suggests that “abandoned and futureless places are part of our cultural heritage.” And he urges browsers to investigate and document these places before they deteriorate further or disappear altogether. The New Jersey State Hospital near Morristown, New Jersey, known as Greystone, is among the decrepit sites he has recently surveyed.

The photo essay begins with historical postcards of Greystone, and continues with some compelling and original images of the interior of the hospital.  One of the best shows a corridor, halfway below grade, with piles of clean white snow beneath cracked windows, the dark silhouette of a wheelchair, and a menacing grid of overhead pipes.  The most successful photographs are the ones in which he lets the space speak for itself: when he tilts the camera to create false drama, the overall effect is weaker.  There’s enough drama in a vacant psychiatric hospital without the artist’s contrivances.

There are several evocative photos on this website, and these might in turn pique the interest of folks who know little about the history of asylums, the treatment of the mentally ill in the nineteenth century, or the preservation of old buildings.  This is a potentially hip way for historians to reach non-academics.

Architectural historians, like myself, sometimes complain that our students sit motionless behind their computers and iphones, encountering culture as two-dimensional fare inside a blinking screen.  As a teacher, I even devise special assignments that force my students to walk around our city looking at actual structures.  So I should be glad: here is a young artist and his young audience.  They are adventurous and curious, and they even go outside.  (I am guessing Slyv’s age based on one photograph of his naked back and the audience’s age based on the language in the comments.)

So while I hate playing the schoolmarm (“kids today!”), I can’t wholeheartedly support this project, particularly the asylums.  While the artist claims he does not recommend trespassing, the comments are sprinkled with barely literate questions that amount to “how do I get past the cops?”   The other explorers are attracted to Greystone because of its creepy, forbidden quality, which apparently equates to counter-culture fun.  Is this generation of people so doused in vampire blood that sadness is a game to them; does morbidity bounce off them?

Curiosity about the patients doesn’t erase stigma; it perpetuates stigma. Sneaking around asylums diminishes the lived experience of the patients who suffered in there.  It’s not OK to lie in someone else’s coffin, or wear someone else’s straitjacket.

If readers of H-Madness are interested in a serious and deeply-sensitive artist’s approach to state hospitals, they will appreciate Asylum by Christopher Payne (MIT Press, 2009), a beautifully produced book of photographs with a foreword by Oliver Sacks.  Payne is an outstanding photographer who knows the conflicted and troubled history of this subject well.  (He also got permission for every site visit.)

Carla Yanni is Professor of Art History at Rutgers, The State University of New Jersey.  She studies the relationships among architecture, science, and medicine from the beginning of the nineteenth century to the present. The Architecture of Madness: Insane Asylums in the United States, was published by the University of Minnesota Press in spring 2007.  In 2000, Johns Hopkins University Press published Nature’s Museums: Victorian Science and the Architecture of Display.