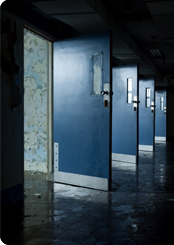 The most recent monthly essay from H-Madness for the online magazine Psychiatric Times has been posted.  For those of you not subscribing to the magazine, here is a slightly revised version of the piece.

Who’s Haunting Whom? The New Fad in Asylum Tourism

Photography has been a part of the history of psychiatry and mental illness since at least the last quarter of the nineteenth century.   French clinicians Henri Dagonet and Jean-Martin Charcot were among the first to use photography in the 1870s to aid in establishing reliable diagnostic criteria for particular maladies.  Charcot especially was renowned for taking photographs of patients suffering from hysteria in order to analyze their hysterical episodes, breaking down their postures and gestures into discrete stages in order to enable a more accurate diagnosis.  A recent book by Mary Bergstein, Mirrors of Memory: Freud, Photography, and the History of Art (Cornell University Press), argues that turn of the century photography played a key role in the development of psychoanalysis.   And in 1946, Life magazine published the now famous photographic essay “Bedlam” by Albert Maisel, chronicling the miserable conditions in which many psychiatric patients in state hospitals were living at the time in the United States.

So, perhaps it should come as no surprise that photographers – both professional and amateur – these days are showing some interest in the history of psychiatry.  What is striking this time, however, is the object of their interests.  For some time now, photographers have been visiting asylums and hospitals that have been emptied and abandoned in the wake of de-institutionalization.  While many people are well aware of the impact de-institutionalization had on inpatient care – in the United States, there were around 558,000 patients in public psychiatric facilities in 1955; that figure was less than 72,000 by 1994 – lesser known is the fact that many defunct facilities were simply left standing, with some of the furniture, equipment, and even personal effects of patients inside.

These abandoned asylums and psychiatric hospitals have proven to be something of an underground attraction for what some bloggers refer to as “urban explorers.”  Along with deserted prisons, churches, factories, orphanages, sanatoria, and hotels, unoccupied mental hospitals have come to assume something of a cult status, as a place to catch a glimpse of a lost world and to capture it on film or in digital form (links to some of the websites displaying these photographs can be found here).

Glancing at the websites of some of these photographers, it is clear that one of the draws for asylum visitors lies in bearing witness to the imagined beauty of debris and relics. The website “Opacity [Urban Ruins],” for instance, is the project of a thirty-year old graphic designer and programmer by the name of Tom Kirsch, who describes it this way:

This site is dedicated to documenting various abandoned places through both text and photographs; recording their transformations through time before they are demolished. The abundance of abandoned asylums and psychiatric hospitals in the New England area create the bulk of the locations here; these beautiful state funded structures are vast and complex, giving insight to both the humanity and mistreatment towards the mentally ill over the past two centuries.

The reference to the “humanity and mistreatment towards the mentally ill” is telling.  At the websites I visited, references to the history of asylums and psychiatry mostly riffed on the theme of abuse and neglect, presuming these to be endemic to asylum life.

And herein, I believe, lies one of the chief enticements for these visitors: the promise of some kind of uncanny experience, grounded in a thirst for adventure and thrills (some admittedly break into the buildings they are visiting).  The New York-based photographers at “Hours of Darkness,” for example, take their photographs at night.  Why then?

There is just something that draws us out into the darkness. Perhaps it’s just the feeling you get on a night where the thermometer doesn’t go past 7 degrees. Maybe it’s that night photography requires more of a commitment one must linger around one location for 3 hours or more just to get one good shot. Whatever it is, we find ourselves out under the full moon with cameras in hand.

The invocation here of the full moon is no accident.  Many, perhaps even most, of the photographs generated by those poking around abandoned asylums appropriate a horror film aesthetic. In an interview with the online magazine Dazed Digital, the London-based photographer Jenny Hardcore was asked what inspired her to visit and photograph an abandoned asylum. “I have always held a visual fascination with places that unsettle the viewer,” she answers.  “I used to spend a lot of time watching horror movies and this visit was very much like walking into a set for me, but a set with very a real history and tangible humanity.”

To be sure, there are sites, such as “Abandoned Asylum,” that bring to their subject matter a measured sobriety.  Iva Stanley, for instance, tells us “We walked through and took pictures. We visited this abandoned facility with the utmost of respect.  I wish there had been more ‘personal’ signs of the lives that had once lived there,  but I was glad just for the experience.  There were many lives lived here and many stories behind those lives.”   This, however, appears to have had little impact on visitors to her site.  A glance at some of the reader comments reveals what many find most compelling in the photos.

OMG!!!! Ghost Hunters went there at night and it was freaky!!but really kool

Wow these photos are disturbing and yet so moving. I would find it hard to enter such a place knowing that horrible things had happened to people here. You are both very brave!

Went to a haunted abandoned mental asylum in australia last night with all of my friends and i am telling you now i have never experienced anything like it in my life, saw ghosts, felt ghosts saw things move now this shit interests me so much, pretty cool.

Again, there are responsible amateur and professional photographers such as Matt McDonough, who make the effort to more thoughtfully place their images in a wider and deeper historical context.   Very few others, however, appear to see anything amiss in their voyeuristic curiosity.  But as historian Carla Yanni has recently noted in her review of the online photography exhibit of the New Jersey State Hospital for the Insane by self-styled urban explorer Slyv, “Curiosity about the patients doesn’t erase stigma; it perpetuates stigma. Sneaking around asylums diminishes the lived experience of the patients who suffered in there.  It’s not OK to lie in someone else’s coffin, or wear someone else’s straitjacket.”

Earlier in history, it used to be acceptable for members of the public to visit madhouses and asylums and to there observe the premises and/or their inhabitants.   Some, if not most, patients considered this form of asylum tourism an intrusion. (Admittedly, visitors to asylums included a wide range of people, including relatives, luminaries, and authorities, not all of whom were unwelcome.  See Permeable Walls: Historical Perspectives on Hospital and Asylum Visiting, ed., Graham Mooney and Jonathan Reinarz). I can’t help but see the camera-carrying “ruins tourists” and “urban explorers” of today – both professional and amateur alike –  as not terribly different from their earlier voyeuristic counterparts, eavesdropping on the lives of others for what amounts to little more than titillation and entertainment. Yanni is quite correct in her analysis:  these excursions are really best understood as incursions, serving only to further mystify and marginalize individuals and groups who historically have been seen as alien to accepted society.

In this regard, we would all be better served considering how former residents of these facilities might respond to these visitations.  One winter day around 1852, a young woman and her companions from the area insisted on touring the Utica State Lunatic Asylum in upstate New York.  She proved to be disappointed by her visit, she later reported to the editor of the patients’ monthly periodical The Opal, owing to the fact that “for all we could see, the patients look and act like other people.  We asked our guide, who was civil enough, if he wouldn’t take us where we could see something. He politely bowed us away to the sleigh.”  The editor of the paper responded to the young visitor’s letter, reminding her and other readers what was often overlooked by outsiders:

Could she see the heart aching with grief which will not and cannot be comforted – or withered by long and solitary indulgence in thoughts of the neglect or scorn of the world, which, whether real or imaginary, cannot be removed by the sympathising tones nor cheering smiles or that love which always soothes and animates a mind in trouble – or torn and racked by passions which are always contending with each other, and, having no reality for their object, may never give any outward manifestation of the agonizing tumult which reigns within!