Skip to content
Posted on May 13, 2012November 10, 2017 by andreaskillen Posted in ExhibitionsTagged Rorschach testing

“X-Rays of the Soul: Rorschach and the Projective Test,” curated by Marla Eby, Peter Galison, and Rebecca Lemov, is the most recent exhibit to open at the Collection of Historical Scientific Instruments located in the Science Center at Harvard University. The exhibit explores the history of the projective test, not only as a diagnostic tool in clinical psychology and psychiatry, but as a widely employed technique in anthropological research and as an important meme and metaphor in popular culture.

Among the many provocative artistic interventions found in this exhibit are four large lenticular reproductions of Rorschach cards. By moving to either side of each lenticular print different features and emphases in the inkblots are revealed. The effect is that as you move from left to right it is as if the inkblot itself is revealing a range of potential interpretations that could land you anywhere along the psychiatric spectrum. 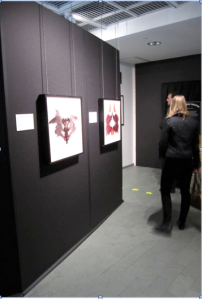 By dedicating one side of the exhibit to inkblot tests and the other to tests like the TAT (Thematic Apperception Test), which rely on more literal and narrative-driven modes of representation, the exhibit highlights two very different approaches to rendering the kind of controlled ambiguity that is the earmark of most projective testing techniques. However, many of the most interesting objects on display are precisely those testing materials which reveal the breakdown of this putatively pure ambiguity. For example, Charles Thompson’s “African American Thematic Apperception Test” (1949) and the anthropological adaptations of the TAT for Tahitians force us to more carefully consider the place of race and culture in the design and practice of projective testing.

“X-Rays of the Soul” is open 9-5:00PM daily in the Science Center at Harvard University and closes June 30.

Jeremy Blatter is a Ph.D. candidate in the History of Science at Harvard University. His research focuses on the history of psychology and the social sciences in the late nineteenth and early twentieth century as well as the intersection of science and visual culture (particularly in the form of film, photography, architecture, advertising, and industrial design). In his dissertation “The Psychotechnics of Everyday Life: Hugo Münsterberg and the Politics of Applied Psychology, 1892-1929,” Jeremy explores the early years of applied psychology and psychotechnics.

One thought on “Exhibit Review – X-Rays of the Soul: Rorschach and the Projective Test, Harvard University (through June 30).”