Skip to content
Posted on May 8, 2015May 8, 2015 by gae16802 Posted in ArticlesTagged 20th century, excited delirium, forensic psychiatry, United States 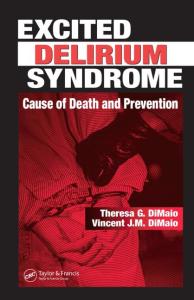 Journalist Justin Jouvenal has written an article for The Washington Post examining the debate swirling around a syndrome dubbed “excited delirium.” Proponents have applied the term to what is believed to be a syndrome affecting certain individuals “Influenced by mental illness or the use of such stimulants as cocaine and methamphetamine” who, when in “its grip often have extraordinary strength, are imperviousness (sic) to pain and act wildly or violently. Then, suddenly, some die.” Critics, however, have noted the popularity of the diagnosis in cases involving suspected excessive force by police in the United States, concerned that it is providing cover for abusive policing practices.

According to Jouvenal’s sources, the concept dates back to the mid-19th century, but started to gain currency more recently in the mid-1980s. Medical examiners in Miami at the time began applying the term in the midst of the cocaine epidemic spreading across Florida.

4 thoughts on “The Controversial Diagnosis of “Excited Delirium””