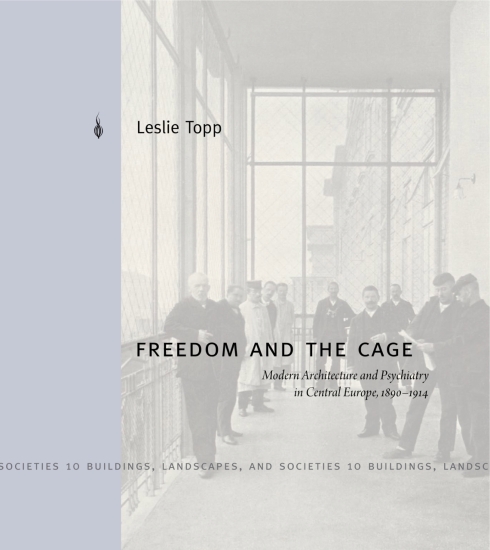 The book Freedom and the Cage: Modern Architecture and Psychiatry in Central Europe, 1890–1914 written by Leslie Topp could be of interest to H-madness readers. It is published by Penn State University Press as part of the series Buildings, Landscapes, and Societies. The abstract reads:

Spurred by ideals of individual liberty that took hold in the Western world in the late nineteenth century, psychiatrists and public officials sought to reinvent asylums as large-scale, totally designed institutions that offered a level of freedom and normality impossible in the outside world. This volume explores the “caged freedom” that this new psychiatric ethos represented by analyzing seven such buildings established in the Austro-Hungarian monarchy between the late 1890s and World War I.

In the last two decades of the Habsburg Empire, architects of asylums began to abandon traditional corridor-based plans in favor of looser formations of connected villas, echoing through design the urban- and freedom-oriented impulse of the progressive architecture of the time. Leslie Topp considers the paradoxical position of designs that promoted an illusion of freedom even as they exercised careful social and spatial control over patients. In addition to discussing the physical and social aspects of these institutions, Topp shows how the commissioned buildings were symptomatic of larger cultural changes and of the modern asylum’s straining against its ideological anchorage in a premodern past of “unenlightened” restraint on human liberty.