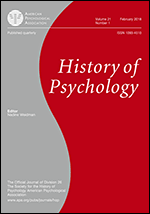 History of Psychology invites submissions for a special issue on the history of emotions in the modern period.

The relatively new specialization of the history of the emotions has revealed that emotion, felt experience, and expression have played a key role in culture, society, and politics. In the history of science, however, interest in the emotions has been more muted. This special issue will focus on the exploration of emotion theory and practice in the human sciences in the modern period – roughly from the late 18th century to today.

This special issue will address the following themes, among others. Was there a particular historical moment in which interest in emotions in the sciences, broadly construed, increased? While some historians situate heightened study of the emotions in the sciences in the 1960s, others point to a surge in interest in emotions after World War II. But we can also go back to William James’s 1884 influential theory of emotion that stimulated intense debate; or to the 1910s, when Walter Cannon experimented on the physiological concomitants of emotion; or to the early 1920s, when unorthodox psychoanalysts Sandor Ferenczi and Otto Rank raised emotional understanding to a central place in psychoanalysis. More recently, studies in the new discipline of social neuroscience have contributed to the ever-growing literature on emotion and the brain.

Can we discover the roots of the academy’s recent turn to the emotions in older traditions that have not yet received their due? Might historical investigations shed light on contemporary debates on emotion including the existence, or not, of a set of universal, basic emotions, or whether emotion is primarily a bodily affect or a cognitive response?

As the study of emotion has not been confined to any one discipline, we welcome submissions on the history of psychology, psychotherapy, neuroscience, psychophysiology, social work or other relevant fields.

The submission deadline has been extended to April 15, 2019.

The main text of each manuscript, exclusive of ﬁgures, tables, references, or appendices, should not exceed 35 double-spaced pages (approximately 7,500 words). Initial inquiries regarding the special issue may be sent to the guest editor, Susan Lanzoni <smlanzoni@gmail.com>or the regular editor, Nadine Weidman <hop.editor@icloud.com>.