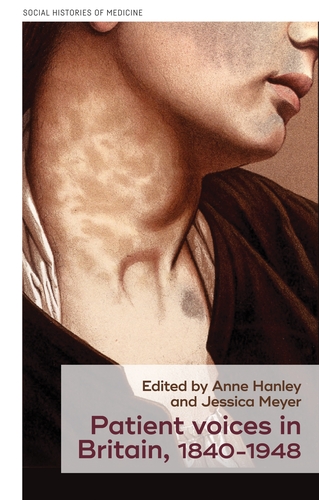 The new book Patient voices in Britain, 1840-1948 edited by Anne Hanley and Jessica Meyer from the series Social Histories of Medicine contains two contributions on the history of psychiatry that may be of interest to h-madness readers.

Lunatics’ rights activism in Britain and the German Empire, 1870–1920: A European perspective, by Burkhart Brückner

“This comparative study examines the emergence and political significance of lunatics’ rights activism in Europe between 1870 and 1920. In writing the history of the criticism of psychiatry, scholars have so far mainly focused on the second half of the twentieth century. This chapter, however, shows that the decades around 1900 already saw a widespread criticism ‘from below’ accompanying the professionalisation and modernisation of European psychiatry. The comparative analysis of the careers of two key campaign leaders, Louisa Lowe (1820–1901) in England and Adolf Glöklen (1861–c.1935) in Germany, reveals the similarities and differences in their motives, ways of campaigning, mobilisation success and political agency at the individual and collective level. Drawing on concepts from the political sociology of social movements and disability history, the chapter highlights the connections between early lunatics’ rights activism and socio-historical categories like ‘class’, ‘gender’ and ‘body’ and identifies these campaigns as political predecessors of the contemporary consumer/survivor/ex-patient movement”.

“Asylum and hospital farms, the agricultural land managed by psychiatric institutions and on which some patients worked, represented transitional spaces between the institution and the wider community, which are pivotal to understanding nuanced experiences of patients. Patient experiences of work were typically mediated through an institutional lens, which arguably silenced the patient voice. This chapter extrapolates patient experiences of farm work from case notes, demonstrating how patients played an active role in ‘narrating’ their experiences through actions, reactions, behavioural traits and occupational identities and thus ‘navigating’ institutional space. These experiences were nuanced, non-linear and inconclusive, and as such do not coincide neatly with the institutional rhetoric of work and its health and economic benefits”.