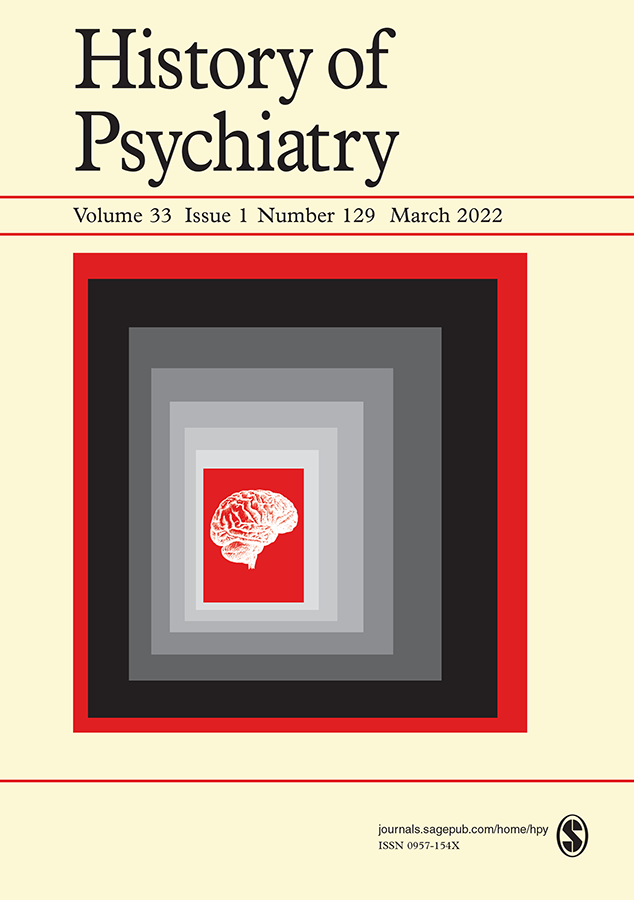 The recently published March 2022 issue of the History of Psychiatry journal includes several articles that may interest to h-madness readers. The titles, authors and abstracts are as follows:

“Past histories charting interactions between British healthcare and Aboriginal Australians have tended to be dominated by broad histological themes such as invasion and colonization. While such descriptions have been vital to modernization and truth telling in Australian historical discourse, this paper investigates the nineteenth century through the modern cultural lens of mental health. We reviewed primary documents, including colonial diaries, church sermons, newspaper articles, medical and burial records, letters, government documents, conference speeches and anthropological journals. Findings revealed six overlapping fields which applied British ideas about mental health to Aboriginal Australians during the nineteenth century. They included military invasion, religion, law, psychological systems, lunatic asylums, and anthropology”.

“Power in psychiatry. Soviet peer and lay hierarchies in the context of political abuse of psychiatry“, by Anastassiya Schacht

“Soviet political abuse of psychiatry in the Brezhnevite era offers a rich case study of entanglement between various layers, impact spaces, and actors of power. This article discusses two types of discursive power in Soviet psychiatry. One sprang from the madness-affirmative cultural canon, in which dissidents sought their self-legitimation. More prominently, there was the power of psychiatrists within their own hierarchic system. I analyse how the action scopes for psychiatric power varied, depending on whether the recipient was a patient or fellow professional. Here, the inherent hierarchy structured and regulated the peer community and secured the stability of medical practices – and of the political entanglement of these practices and actors with the state-owned places of power”.

“An overview on Hebephrenia, a diagnostic cornerstone in the neurodevelopmental model of Schizophrenia“, by Carlo Maggini & Riccardo Dalle Luche

“Pre-Kraepelinian observations converged in Kahlbaum’s and Hecker’s description of Hebephrenia. For Kraepelin, Hebephrenia was an ‘idiopathic incurable dementia whose onset is in adolescence’. It became the core of ‘Dementia Praecox’, and then Bleulerian ‘Schizophrenia’. In recent decades, the resurgence of the ‘late neurodevelopment’ hypothesis of schizophrenia has brought into focus Hecker’s clinical reports of adolescents who, as a result of a putative loss of psychic energy, showed a rapidly progressive cognitive impairment leading to functional and behavioural disorganization. This paper summarizes the nineteenth-century conceptualization of Hebephrenia as a developmental illness”.

“From Melancholia to Depression: Disordered Mood in Nineteenth-Century Psychiatry“, by Åsa Jansson

“My book From Melancholia to Depression: Disordered Mood in Nineteenth-Century Psychiatry charts how melancholia was reconceptualized in the nineteenth century as a modern mood disorder and a precursor to clinical depression. The book shows how this occurred chiefly in two ways. First, the idea of disordered mood as a medical concept was created through the appropriation of language from experimental physiology into the realm of psychopathology. Second, the interplay of statistical and diagnostic practices formed the basis for modern psychiatric classification and facilitated the standardization of melancholia as a psychiatric diagnosis. These developments were key to the reconceptualization of melancholia and the subsequent emergence of clinical depression, and were foundational to modern psychiatric theory and practice”.

“‘A landmark in psychiatric progress’? The role of evidence in the rise and fall of insulin coma therapy“, by Robert Freudenthal & Joanna Moncrieff

“This paper examines the evidence behind the use and decline of insulin coma therapy as a treatment for schizophrenia and how this was viewed by the psychiatric profession. The paper demonstrates that, from the time of its introduction, there was considerable debate regarding the evidence for insulin treatment, and scepticism about its purported benefits. The randomized trials conducted in the 1950s were the result, rather than the origins, of this debate. Although insulin treatment was subsequently abandoned, it was still regarded as a historic moment in the modernization of psychiatry. Then, as now, evidence does not speak for itself, and insulin continued to be incorporated into the story of psychiatric progress even after it was shown to be ineffective”.

“The contributions of Australians on shell shock are absent from the literature. However, two Australians were pioneers in the treatment of shell shock: George Elton Mayo (1880–1949) and Dr Thomas Henry Reeve Mathewson (1881–1975). They used psychoanalytic approaches to treat psychiatric patients and introduced the psychoanalytic treatment of people who suffered from shell shock. Their ‘talking cure’ was highly successful and challenged the view that shell shock only occurred in men who were malingering and/or lacking in fortitude. Their work demonstrated that people experiencing mental illness could be treated in the community at a time when they were routinely treated as inpatients. It also exemplified the substantial benefits of combining science with clinical knowledge and skill in psychology and psychiatry”.

“The Goldwater Rule: a bastion of a bygone era?“, by Aoibheann McLoughlin

“In tandem with the changing political landscape in recent years, interest in the Goldwater Rule has re-emerged within psychiatric discourse. Initiated in 1973, the Goldwater Rule is an ethical code specific to psychiatry created by the American Psychiatric Association in response to events surrounding the USA presidential election of 1964, in which the integrity of the psychiatric profession was challenged. Current detractors view the rule as an antiquated entity which obfuscates psychiatric pragmatism and progression. Proponents underscore its role in maintaining both respectful objectivity and diagnostic integrity within the psychiatric assessment process. This essay aims to explore the origin of the rule, and critique its applicability to modern-day psychiatric practice”.

“Prominent English neurologist Sir Charles Symonds, during World War II service with the Royal Air Force, published a series of articles emphasizing the role of fear initiating psychological breakdown in combat airmen (termed Lack of Moral Fibre). Having served in a medical capacity in the previous war, Symonds re-presented the phylogenetic conceptualizations formed by his colleagues addressing ‘shell shock’. In 2013, the Diagnostic and Statistical Manual of Mental Disorders, fifth edition (DSM-5) re-classified Post Traumatic Stress Disorder (PTSD), removing the diagnosis from the category of Anxiety Disorders. This was the view introduced a century ago by the trench doctors of World War I and affirmed by Symonds’ clinical experience and studies in World War II”.