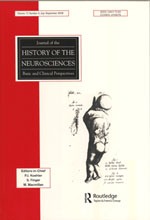 The last issue of the Journal of the History of the Neuroscience has been released online. One of the four articles presented in this issue focuses on the 1958 Moscow Colloquium on Electroencephalography, while another offers perspectives on the late-19th century reception of neuron theory. Titles, authors and abstracts are listed below:

The Moscow Colloquium on Electroencephalography of Higher Nervous Activity and Its Impact on International Brain Research, by Boleslav L. Lichterman

Late 1950s was a period of recognition of Russian neurophysiology by international neuroscience community and vice versa. This process of “opening windows in both directions” might be illustrated by the story of The Moscow Colloquium on Electroencephalography of Higher Nervous Activity. The Colloquium took place on October 6-11, 1958 at the House of Scientists in Moscow. It was organized by the Academy of Sciences of the USSR under the initiative of the Institute for Higher Nervous Activity and focused on (a) EEG correlates of cortical excitation and inhibition; (b) electrophysiological study of different brain structures and their role in conditioned reflexes; and (c) EEG of higher nervous activity in humans. At the final session it was suggested to launch an International Year for the Study of the Brain and to ask UNESCO for international coordination of brain research. This resulted into the International Brain Research Organization (IBRO) founded in 1960. This article is based on unpublished records of international contacts of Soviet neurophysiologists and organization of the Moscow Colloquium from the Archive of Russian Academy of Science (ARAN), reports in Soviet periodicals, publications in obscure Festschriften, etc.

Acceptance of the Neuron Theory by Clinical Neurologists of the Late-Nineteenth Century, by J. Wayne Lazar

This article explores reactions of clinical neurologists of the late-nineteenth century to the concept of a unified nerve cell, the “neuron,” which developed from the research on fine anatomy of the nervous system and from conclusions of Waldeyer based on that research. Assessment shows that Waldeyer’s role in the acceptance of the neuron theory was not straightforward. A study of primarily American medical literature shows rapid acceptance, eager applications, and high expectations. Nonetheless, some clinicians were disappointed in its immediate relevance. An explanation for this disappointment is offered.