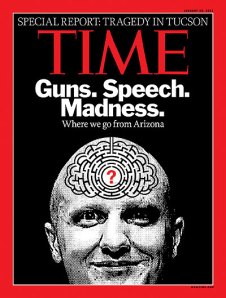 Psychiatric Times has posted the monthly installment of our contribution from H-Madness.  This month, co-editor of H-Madness Greg Eghigian discusses debating the impact of media coverage of Jared Loughner’s lethal shooting in Tucson, AZ.   We post it here below, with minor revisions, for your convenience.

On January 24, Ronald Pies posted a thoughtful piece here entitled “Who Can Forgive Jared Loughner,” advocating the importance of relinquishing hatred in cases like the ones in Tucson and transforming “our revulsion and rage into something higher and nobler.”  The piece represents one of among many – albeit, among the more considered and deliberate – responses to the events in Tucson.  As we all have witnessed, Jared Loughner’s lethal violence sparked a wave of highly publicized reactions from journalists, government officials, political activists, the public-at-large, and, of course, mental health professionals.   Whenever horrendous and shocking events like these occur, it is perhaps not altogether surprising that people search for meanings and explanations.  Officials and the public, in particular, are often prone to look for “lessons” to take away from such tragedies, hoping to pin blame or responsibility on something (not just someone), so that it can be legislatively eliminated or regulated.  A peculiar logic stamps our political culture, by which exceptions tend to make the rules.

Among my colleagues and friends, Jared Loughner and the shooting in Tucson provoked a rather passionate debate.  The issue that triggered this debate was the media’s coverage of the situation – in particular, its treatment of Loughner’s mental status.  As reports started coming out chronicling Loughner’s verbose texts, unsettling social interactions, and odd videos, the question of whether he suffered from a mental illness was raised.   For a number of my colleagues, this led them to raise (often rhetorical) questions about the quality of mental health care in the country and in Arizona in particular.  To be sure, most everyone I know regarded the case as more evidence for the need to place greater controls over the distribution and ownership of guns.  But in light of the recent political fights over health care, the fact that a mentally ill man was allowed to carry on in the way Loughner did for years without any apparent medical intervention was perceived as a travesty.  And, in fact, one colleague of mine accused reporters of being equally complicit in neglecting the matter of mental health care, because they were not discussing Loughner in clinical terms, but rather referring to him in colloquial terms such as “odd,” “extremist,” and “unstable.”

I must admit, my reaction was more along the lines of Vaughan Bell’s, a clinical and research psychologist at King’s College London and a blogger at mindhacks.com, who lamented in a piece he wrote for Slate:

For many, the investigation will stop there. No need to explore personal motives, out-of-control grievances or distorted political anger. The mere mention of mental illness is explanation enough. This presumed link between psychiatric disorders and violence has become so entrenched in the public consciousness that the entire weight of the medical evidence is unable to shift it.  Severe mental illness, on its own, is not an explanation for violence, but don’t expect to hear that from the media in the coming weeks.

Like Bell, I was worried by (1) how quickly reporters and the public were willing to categorize Loughner as mentally ill and (2) how easily those same observers found it to assume a connection between mental illness and the commission of violent acts. With little and potentially unreliable information about him to go on, pundits and other observers felt free to attribute Loughner’s behavior to a psychopathology (most appeared to quickly fix on schizophrenia).  Now, I was certainly willing to concede that it might well turn out that he was, indeed, suffering from a diagnosable mental illness. But my experience with clinicians over the years tells me that responsible professionals would be loathe to apply a diagnosis to someone (1) with only incomplete, hearsay information to go on and (2) without an opportunity to directly meet with the individual.

I therefore read Bell’s piece as a cautionary, not a categorical, statement.  As the media has historically shown time and again, they and the public are prone to seeing things in the simple terms “strangeness = instability = crazy = threat = menace,” much to the detriment of those suffering from mental illnesses and any variety of other disabilities. Bell reminds us that the vast majority of those suffering from mental illness pose no threat to others: on the contrary, they are more likely to be victims of crime and abuse than perpetrators.  Moreover, as Dave Cullen has masterfully shown in his book Columbine, early reports on shocking events like those in Tucson are often pockmarked with errors – errors which get repeated so often and so quickly, that they remain largely insusceptible to correction.  So, it seems to me, especially in the frantic immediacy of fast-moving, troubling events, it is critical that we approach these matters in a restrained fashion, insisting on careful analysis and guarded conclusions based on evidence from multiple sources.

One of my colleagues, however, disagreed with my (and Bell’s) perspective.  As someone with a family member diagnosed with schizophrenia, she argued that Bell’s and my position did a disservice to those battling serious mental disorders.  A study of high-profile or celebrity shootings over the last fifteen years, she insisted, would invariably show that the perpetrators were mentally ill.  By neglecting this reality, by de-pathologizing people like Loughner, she continued, I was playing in the hands of retributive prosecutors, reinforcing their self-serving image of Loughner and others like him as evil monsters.  Thus, the position I and Bell have staked out presumably serves only to promote ignorance about mental illness.

I have tried to take these comments to heart.  Mulling this over, I think my colleague has hit on something.  To not raise informed mental health concerns in the immediate aftermath of situations like the one in Tucson runs the risk of ceding valuable media time and space to other, potentially stigmatizing outlooks.  That said, psychopathologizing behavior has not consistently led to the acceptance of vulnerable populations: in this regard, one need only look at the modern history of homosexuality for an historical precedent.  What I feared was that the one “lesson” Americans would come away with from Jared Loughner’s story was that the mentally ill were dangerous.   And sure enough, as frenetic discussions simmered down, in the wake of the funerals of Loughner’s victims and the rise of other breaking news stories, the conversation shifted to the question of how we should keep guns out of the hands of the mentally ill.   As psychiatrist Jonathan Metzl concluded in his opinion piece in the New York Daily News about these events, “Ultimately, the way we frame these connections tells us as much about our own cultural biases and blind spots as it does about the acts of a lone, and obviously troubled, individual.”

I now have come to think that in this debate with my colleague over the possible impact of media coverage about Jared Loughner, we both may well be right/wrong.  Perhaps being proactive in getting the message out about mental illness and being more reserved about expressing judgments both carry the potential for encouraging the spread of longstanding stereotypes about those with struggling with psychiatric disorders.  If so, this may be a reflection of just how deeply engrained and unassailable the stigma of mental illness remains.

One thought on “The Tucson Shooter and Media Coverage”