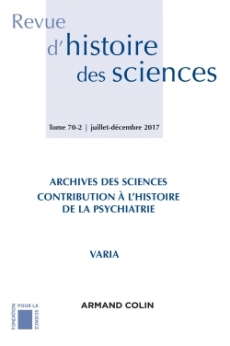 The new issue of Revue d’histoire des sciences is now online. The issue’s topic is “Archives des sciences, contribution à l’histoire de la psychiatrie” and contains articles that could be of interest to H-Madness readers:

“Maurice O’Connor Drury (1907–76), an Irish psychiatrist, is best known for his accounts of his close friendship with the eminent twentieth-century philosopher, Ludwig Wittgenstein. His only book, The Danger of Words (1973), was well received by those who had an interest in the relationship between psychiatry, psychology and philosophy. This article concentrates on Drury’s experiences, studies and writings in these fields”.

“The article explores the history of the archive of the Max Planck Institute of Psychiatry, beginning with its establishment during World War One and briefly tracing its development through the 20th century. Against this historical and institutional backdrop, the article then turns to a discussion of the archive’s acquisition of the papers of Emil Kraepelin, the institute’s founding director, in the 1990s and the ensuing efforts to preserve and catalog them. It examines some of the practices and strategies used in archiving the papers and generating their finding aids, as well as the formation of a working group to evaluate the papers. The article will then delve into the planning and execution that led to the publication of many of these archival records in the Kraepelin Edition, addressing issues related to document selection as well as the project’s funding, historiographic aims, and thematic focus. The article reflects on several of the epistemological challenges facing the project, stressing in particular the tension between the project’s historiographic aims and the archival source material.”

“This article origins from a research project conducted between 2006 and 2009 in Venice at the Archives of the ancient Mental Asylum, located in the isle of San Servolo. The principal investigator of the research project was Mario Galzigna, lecturer in History of Scientific Thought and Clinical Epistemology at Ca’ Foscari University of Venice. The aim of the research project was to analyse some specific aspects of the Asylum functioning during the period 1840-1904. My article, in adopting a conceptual history perspective, examines a more limited time frame (1840-1877) and deals with three dimensions which are closely related : 1. psychiatric taxonomy and the diagnostic procedures ; 2. applied treatments ; 3. life and clinical stories of some inmates. In the first part of the article I describe the Archives and I outline the methodological framework of my work. The scientific background consists in the European theoretic medicalpsychiatric influences, in particular those coming from French and German areas. At the same time, a crucial role is played by the social and cultural characteristic features of the Veneto Region society. My work is mainly based on the systematic examination of the clinical records and on the analysis of the primary sources which are guarded in San Servolo Archives.”

“Based on the letters exchanged by philosopher Georges Canguilhem and historian Henri Ellenberger, this paper looks back on the controversial topic of the « forerunner » in the history of science and more particularly in the history of psychiatry (see Ellenberger’s conference in Yale : « Psychiatry and its History : Methodological Problems in Research », 1967). On the one hand, we recall Canguilhem’s unfolding attitudes to the question of forerunners and continuators in the history of science – a stance one should not confuse with the more radical position of Alexandre Koyré. On the other hand, our study draws on the systematic exploration of the use of the word « forerunner » in the main works of Canguilhem and Ellenberger. In fact, although Canguilhem reduces the possibilities of the existence of real forerunners in the history of science, we highlight the fact that he continues to grant legitimacy to this notion in the history of techniques. Lastly, contradicting common misconception, we bring evidence that Ellenberger, in a reflective stance, restricts the notion to the description of collective processes of knowledge accumulation. Even more importantly, he describes it as a « retrospective » construct as part of a framework of research on the phenomena of transmission of knowledge and filiation between scholars.“