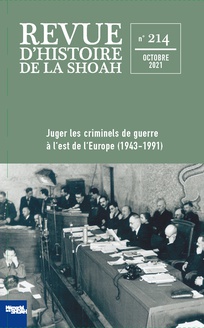 This new paper published on the Revue d’Histoire de la Shoa might be of interest to H-Madness.

In December 1944, during a public trial held in Vinnitsa, some members of the medical staff from the city’s psychiatric hospital were called to the stand. They were accused of massacring a large portion of the patients, who had been identified as Jewish, on the orders of the German authorities. While the expeditious nature of the Stalinist justice system in the wake of WWII has been well established, the elements of the investigation uncovered by Soviet authorities (video recordings of the unearthing of mass graves, forensic autopsy reports, witness statements, and first-hand accounts) nevertheless helped demonstrate the highly complex interactions between the town’s medical elites, collaborationist local authorities, and German occupiers. This evidence not only shed light on the fate of the patients in the psychiatric hospital, which was related to that of the rest of the city’s Jewish population, but also the fate of other patients at city hospitals who were made to provide beds to the occupiers, specifically for Soviet prisoners of war, who were subjected to a wide variety of treatments based on their nationality (Jewish, Ukrainian, etc.) and the capacity of the medical personnel and local civil society to provide aid. With respect to the Soviet investigation carried out in 1944 in Vinnitsa, local post-war German judges used the evidence they had compiled to confront the Germans who were behind the patient massacres in Vinnitsa, an event that was similar to many other killings that had taken place in hospitals in occupied Soviet territory. The article is based on sources located in Russia, Ukraine, and Germany.