Skip to content
Posted on May 3, 2015 by benoitmajerus Posted in Announcements, BooksTagged work 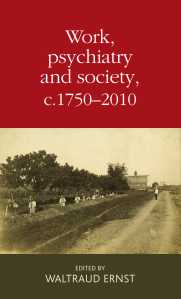 Work and psychiatry seems to be the new ‘hot’ topic in the history of psychiatry. Our latest post was dedicated to this theme, and this book announcement is also related to “Work, psychiatry and society”. The blurb of the volume edited by Waltraud Ernst announces:

This edited book offers a systematic critical appraisal of the uses of work and work therapy in psychiatric institutions across the globe, from the late eighteenth to the end of the twentieth century. Contributors explore the daily routine in psychiatric institutions within the context of the wider socio-political welfare and control policies and economic conditions. They explore whether work was therapy, part of a regime of punishment, or a means of exploiting free labour. By focusing on mental patients’ day-to-day life in closed institutions, the authors fill a gap in the history of psychiatric regimes. The geographic scope is wide, ranging from Northern America to Japan, India and Western as well as Eastern Europe, and authors engage with broader historical questions, such as the impact of colonialism and communism, and the effect of the World Wars.

1 The role of work in late eighteenth- and early nineteenth-century treatises on moral treatment in France, Tuscany and Britain (Jane Freebody)

5 ‘Useful both to the patients as well as to the State’. Patient work in colonial mental hospitals in South Asia, c. 1818–1948 (Waltraud Ernst)

11 The patient’s view of work therapy: The mental hospital Hamburg-Langenhorn during the Weimar Republic (Monika Ankele)

12 They were ‘improved’, punished and cured: The construction of ‘workshy’, ‘industrious’ and (non-)compliant inmates in forced labour facilities in the First Republic of Austria between 1918 and 1938 (Sonja Hinsch)

15 From work and occupation to occupational therapy. The policies of professionalisation in English mental hospitals from 1919 to 1959 (John Hall)

16 Work is therapy? The function of employment in British psychiatric care after 1959 (Vicky Long)

17 The hollow gardener and other stories: Reason and relation in the work cure (Jennifer Laws)